Neso’s Fight Against Terrorism Gets A Boost, BODERPOL Offers To Train Officers Abroad. 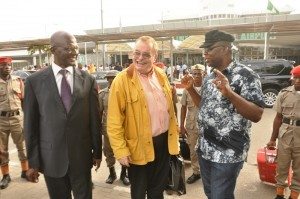 The efforts of NESO in curbing crime across the country has received a boost as  World Border Organisation (BODERPOL), Special Adviser on Africa, Mr. Serge Rinkel has offered to sponsor officers and men of the organization to a training tour in Tunisia.
Rinkel made the promise when   he was received at the Nnamdi Azikiwe International Airport Abuja on Saturday, when he paid a working visit to Nigeria.
He said he was impressed by the organisation’s resolve at fighting crime and insurgency.

The Special Adviser described the visit as a milestone towards establishing a new partnership in the fight against terrorism, insurgency and border crimes in Nigeria.
“This new partnership has become necessary to track down the activities of terrorists migration, their sponsors, foreign contacts, bank accounts and all other borders related crimes. The world over today suffers from similar threats; this common problem can be tackled through this synergy, since the world has become a global village.

“The new strategy would be driven by the community in critical areas of information gathering, tracking, early warning and quick mobilization of relevant conventional security agencies for on the minute threats response. Human life and national economy is of high premium and cannot be left in the hands and dictates of unpatriotic elements,” he said.
He explained that NESO being among very few NGO’s threading this path of anti-terrorism and insurgency in the world, has drawn the attention of key relevant stakeholders and major players in the areas of anti-terrorism and border crimes to put together a formidable wall against this heinous crimes.

“Nigeria is not standing alone on this; thus, found partnership in countries and world unions that say no to human destructions. It is expected that the Government and people of Nigeria will applaud and appreciate BORDERPOL and the European Union for this giant stride of friendship and partnership,” he added.

The team of NESO senior officers and men led by the Corps Commandant General (CCG), Comrade Sani Aliyu and Alhaji Idrisu Mohammed the International liaison Officer between NESO and BORDERPOL  were on ground at the airport to  welcome Mr.  Rinkel on his visit to Nigeria.